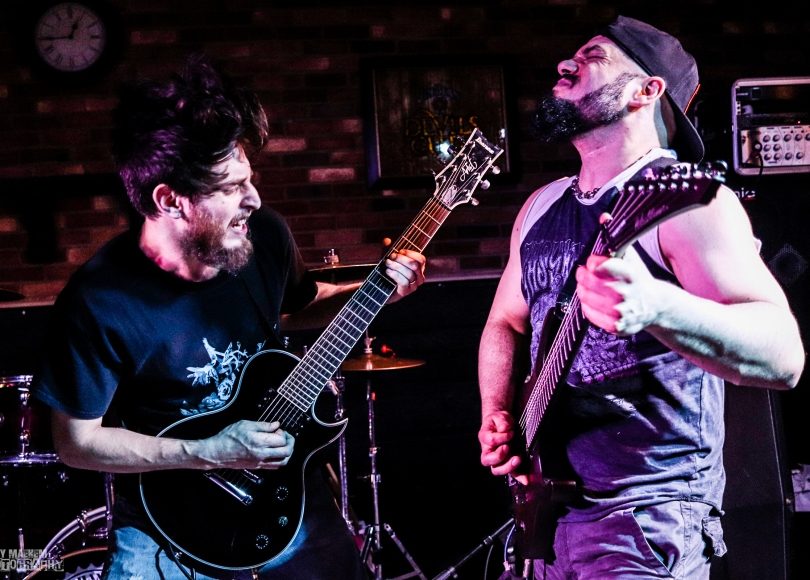 On Friday night the Maehem Team took a trip North to the SV2 in Green Bay, WI for a special evening of metal featuring Crater, Squidhammer Metal, Chi Noden, and Marc Rizzo of Soulfly! Rizzo is currently on his Solo Experience Tour. Catch a date near you below!

The evening was starting off strong as people began to fill the venue in anticipation of the evening ahead; starting with a performance by Crater. However- no one was prepared for this evening of surprise performances!

Squidhammer Metal was next in line and they brought the brutality as always! It’s never a REAL party until these guys hit the stage! They performed all of our favorite Squid-hits including “Spark”, “Chapter 2” and “New Found Tribe” as well as a performance of their newest tune “18436572”. Check out our footage of New Found Tribe below!

Chi Noden hit the stage with the guest appearance of Corey Tod Fritschka on bass guitar. Both of these artists have an energy like no other. When I saw them sharing a stage the chemistry was unreal! Footage below!

As if that wasn’t cool enough in itself, they took the stage once again to perform with the man himself- Marc Rizzo! They cracked the stage wide open and the crowd packed in as close to the stage as possible. After their first tune Rizzo gave the crowd a quick glance over and stepped into the mic- “Hey THOM-Where you at??” To all of our surprise- Thom Hazaert of Combat Records and EMP Label Group was in the house and on the stage on vocals! Performing covers of our favorite metal tunes including “Territory” (Sepultura), “Mandatory Suicide”(Slayer), and one hell of a performance of “Mouth for War” (Pantera)! Check the footage below to see their performance of “Mouth for War” with guest appearances by Mitchel Fulcer of All Kings Fall and Jake Hiller of Squidhammer Metal!

After the stage cleared we headed out back to check out the party bus (footage coming soon via Youtube) Another excellent evening of metal at one of our favorite Wisconsin venues! Great times were had and memories were made. It’s always a pleasure to get out and spend an evening with the band family. Metal is alive and well in the Wisco-scene! Until next time my friends- Keep it METAL!