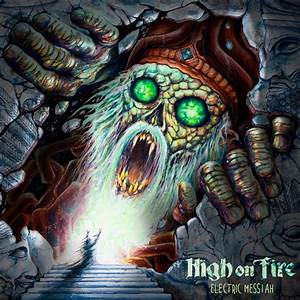 High on Fire has successfully released their album ‘Electric Messiah’ in tribute to the late legend Lemmy Kilmister. This album is packed with references to the legends and lore of ancient evil that had taken place over time.

We begin this album strong with solid and heavy doom beats and riffs. “Spewn From the Earth” picks up right where their last album ‘Luminiferous’ (2015) had left off! Following this jam is “Steps of the Ziggurat/House of Enlil’ which is a reference to the ancient Annunaki people. The return of a queen who opens the door of Hades which has been sealed for 200,000 years, releasing the Wraiths upon mankind.

We enter the title track, “Electric Messiah.” This has an upbeat swing to the story of stealing power from an ancient god. To claim the throne is to become the Electric Messiah! Check out their video release for this track below!

“Sanctioned Annihilation” warns that we better hang on because there is a plan to eliminate the human race! A bomb was used to scorch the Earth and devastate thousands. “The Pallid Mask” illustrates that the ‘milk’ of time has soured and the end of Babylon has arrived.

We reach my favorite track “God of the Godless.” This is hard driven rock! It contains all the essential heavy-metal grooves that stoner metal is known for. The intensity of the vocals matches the crunching distortion-driven rhythms to perfection.  The lyrics talk about the big question of life’s meaning. Why were we created? Is there a purpose and end?

“Free Booter” is a fast-paced rocker about pirates traveling and raiding foreign lands, as pirates tend to do. They torment and lay waste to the people they exploit. “The Witch and The Christ” is a song essentially about human sacrifice; leading us into the final track of the album, “Drowning Dog” This song closes things out strong with the thoughts of end times; when faith fails you and survival becomes key.

I would like to thank the bands of Doomed and Stoned Chicago for suggesting High on Fire to me; this band is a great inspiration to their craft. I was eagerly awaiting the release of ‘Electric Messiah,’ and I thoroughly enjoyed it. Another great album from another great band.

Track List for ‘Electric Messiah”
1. Spewn From the Earth
2. Steps Of The Ziggurat/House Of Enlil
3. Electric Messiah
4. Sanction Annihilation
5. The Pallid Mask
6. God Of The Godless
7. Free Booter
8. The Witch And The Christ
9. Drowning Dog